Greetings from the director 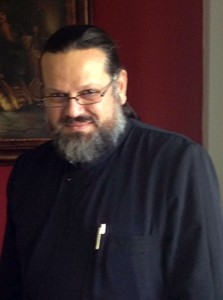 Greetings from the Director

In the beginning of the previous decade, the agony of Mrs. Maria Kokkori for her daughter Aleka, a girl suffering from Down syndrome and her concern about what would happen to her child after her death, led her to the office of the late Archbishop of Athens Mr. Christodoulos. It was in that office, in 2001, that it all began. Maria put forward her anguish and concern to the Archbishop, not only for her own daughter but also for the other children in the world with the same problem. Maria’s question was simple: “And then what? What will happen to my child when I die?” So Maria bequeathed a piece of land that she owned in Ano Glyfada; she also donated some funds for the erection of a model center in which female individuals with mental retardation and Down syndrome would be hosted.
In 2005 the task was completed and the institution was given its legal status. On 16-11-2005, the decision for the establishment of a Religious Institution named “Institution for Female Individuals with Mental Retardation and Down syndrome of the Holy Archdiocese of Athens”, was published in the Government Gazette.

In March 2007, the institution started out, with its first residents hosted in it and enjoying the tenderness and care of its staff. Since then much progress has been made. Archbishop Ieronimos II took over the helm of the Archdiocese of Athens. Experienced in ministration and philanthropy as he is, he entrusted us with the management of the institution on July the 5th 2010. Shortly after that, on the 14th of July, he placed us on the management committee as a Secretary. On the same year Maria Kokkori, the “soul” of this effort, passed away confident and smiling as she was sure about what she had left behind.
In the last three years, with the venerable mandate of our Prelate, we renovated the institution entirely and laid it on a new basis, which meets the needs of our residents but also the requirements of the state agencies, in order for the institution to be licensed, based on the new forms of hosting mentally retarded people.
In 2011, two licenses for operating our Homes of Supportive Living were provided to us by the Attica Region Prefecture. Since July 2012, the funding of the Homes is continuously ensured by the General Benevolent fund of the Archdiocese of Athens. In July 2012, the Homes were placed under the aegis of the nonprofit organization of the Archdiocese of Athens “Mission” and a financial program from the NSRF was ensured for the next two years for our Homes of Supportive Living.
With the blessing of the Archbishop and our President, our residents enjoy our hospitality in a modern living space with innovative teaching methods and equipment, medical healthcare, modern entertainment media and programs for independent living. In our Homes, we mainly secured and still ensure the safe living for girls from all corners of our country, without any discrimination.
Nowadays, in an era when everything is presented on the internet, we decided not to be left behind. We created a modern website in order to make all of you participants in our work and our offer to society through a new direct and alternative communication environment, a modern portal for information and debate. This website will be open to all of you and will host your opinions, your postings and your announcements.
We expect everyone, today, right now to come and join us so as to go along with each other. In an effort to create conditions and chances for more homes, for even more children, younger and older ones, who need us, who live next door, abandoned, left to their fate or to the despair and anguish of their beloved ones.
Let’s do our best, let’s combine our power so as to be able to answer the question of Mrs. Maria Kokkori “And then what will happen to my child?” This time, WE have the answer.

Archimandrite Nikodimos Farmakis
Manager of the institution, Administrative Manager of the Homes of Supportive Living, Secretary of the Board.